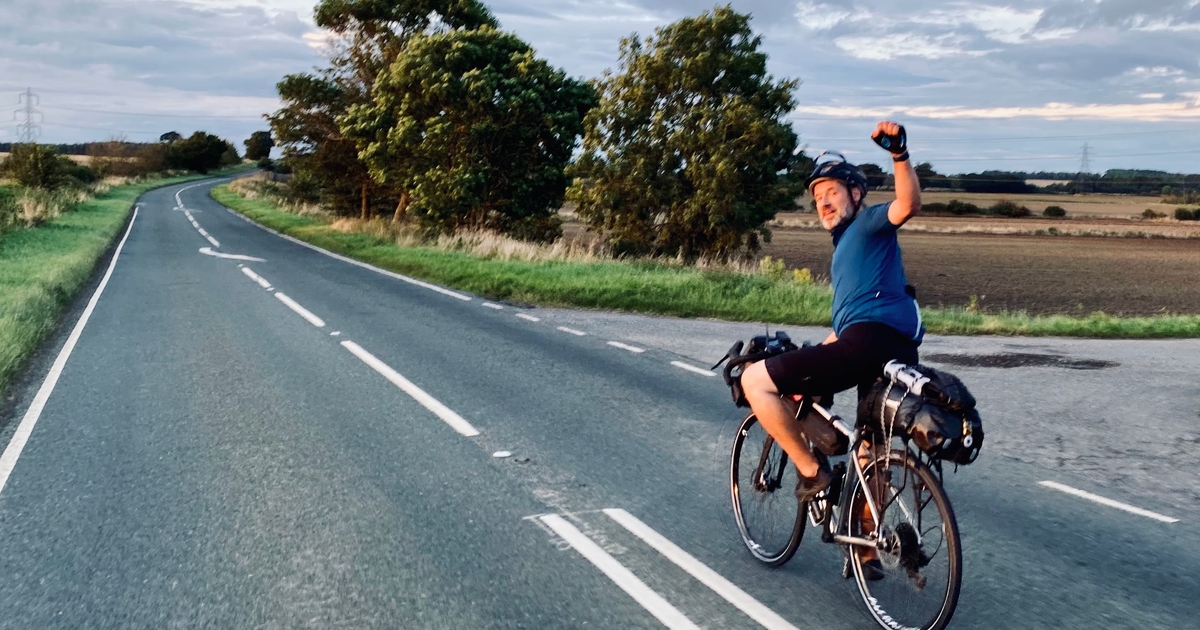 I made it! And you made it all worthwhile.

But how did we get here? One pedal stroke at a time. We just kept moving. I was going to be motorbiking Africa last week. When Covid put a stop …

But how did we get here?

One pedal stroke at a time. We just kept moving.

I was going to be motorbiking Africa last week. When Covid put a stop to that i’d planned a motorbike ride in the UK instead. But on the morning of the 22nd of July I bumped into Pete, a fellow dog walker who told me he was reading a book about the Great North Road and that that week it will be 100 years since it was renamed the A1.

That’s where the seed was planted. But I wasn’t 100% on cycling it. Steve Silk the author of the book does it in 11 days and I only had 9 available. Plus I’d never cycled more than 32 miles in a day and this looked much harder. What I really wanted was a motorbike ride.

Later that day, I bought the book and tweeted the author asking if he’d share his route.

He responded a couple of days later and I was able to see that not all of the route was on roads. In fact a lot of it seemed to be along dirt tracks and cycle paths. I started chatting with my friend, experienced cycle tourer David Charles about the kind of kit he used for his long rides. Initially with the idea of riding to Wales. But the book was getting interesting what with all the Coaching Inns and mentions of great food and ale I wondered if it could be done in 9 days.

I’d also asked David if it was too late to set up a crowdfunding page. If I was going to do a bike ride it might make a good fundraiser. Especially for the charity that David rides for. The plight of refugees has been close to my heart since I experienced first hand camps in Jordon, Iraq, Syria, Turkey and France.

At the end of July I still wasn’t sure what I might do. I wrote in my weekly email…

“Perhaps I’ll start in London and see how far north I can get. Or maybe I can zigzag across the community map and visit any of you who might put me up for the night. ;-)”

But come the start of August I’d decided that i’d combine amateur radio with a bike ride up the GNR and bought the url CycingHertz.com

The week before the ride I got in a massive 9km of cycling. Mostly to test that the bags i’d just bought on eBay wouldn’t fall off.

And then on the 7th of August me and my bike got on the train and traveled into Central London and the beginning of the Great North Road. The plan was to use Steve’s route up the GNR as a rough guide.

This is how it went.

You see so much on a bike. You can learn a lot as well.

Things I learned or relearned along the way. Including some cycling tips:

1. You can google what you like, but the advice of experienced friends is a much better resource.

2. Your body can do more than you think it can.

3. You can sing away your woes.

5. Stop complaining and focus on the positive.

6. Eat and drink frequently in small amounts. Even if not hungry.

7. No one refuses to fill a lone cyclist’s water bottle.

9. Greet everyone with a smile.

10. The kindness of strangers is everywhere.

At time of writing you have all helped raise £2300

When I get the chance to pick through my journal I’ll share more stories and images via the Documentally.net email.

My heart is overflowing with thanks to everyone who has supported me on this journey.

If you are thinking of doing something similar, go for it! There are no downsides.
Yes, this was one of the hardest physical challenges of my life and yes my body is tired. But my mind is still being fuelled with memories of all the amazing moments and people I’ve come into contact with along the way.

On day eight, one of the hardest days of my journey, I had the brief pleasure of riding alongside a 78-year-old cyclist called Jim. He sat proud on a shiny bike in full lycra, flying past Berwick on Tweed. As he confidently wound his way around the traffic. I asked him why he didn’t slow down for anything. He told me that he needed the momentum, that if he stopped there was a chance he’d fall over.

The road I live on, the Great North Road, is celebrating exactly 100 years since it was renamed the A1.

So I thought I’d ride 800km from London to Edinburgh along a cycle-friendly version of the GNR while simultaneously raising money for a great cause.

The only problem is that I’ve never cycled more than 32 miles (52km) in a day before.

The more of you that donate, the more likely I will make it all the way. But most importantly the more people we can help. 🙂

Why have I partnered with Choose Love?
Put simply, they save lives. And they do it very efficiently. They have helped well over a million people so far. The money you give will feed the hungry, house the homeless and protect vulnerable people from danger.

Please give what you can.

I'll start in London on the 9th of August and, all going to plan, end up in Edinburgh on the 15th.

While I peddle up England into Scotland, I thought I might tie in another passion of mine, amateur radio. (My callsign is G5DOC) So as well as chatting to folks along the way I plan to contact fellow radio operators via the network of radio repeaters that line this ancient coaching route.

David D donated to Cycling Hertz - One man, a bike and his radio.

Laura K donated to Cycling Hertz - One man, a bike and his radio.

Rhian L donated to Cycling Hertz - One man, a bike and his radio.

Congrats - and have really enjoyed your account of the ride!

Therese T donated to Cycling Hertz - One man, a bike and his radio.

Congratulations on getting to the end destination in super quick time for a worthy cause!

Gareth E donated to Cycling Hertz - One man, a bike and his radio.