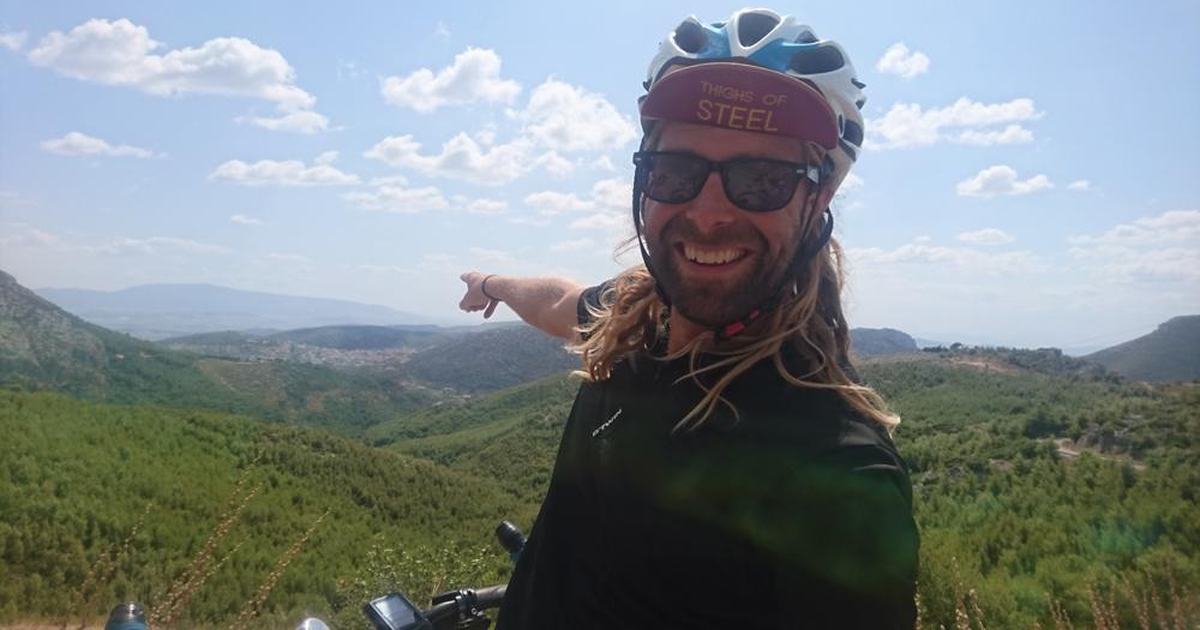 What an unbelievable experience - I never dreamed we'd hit £100,000! Thank you to everyone who has donated. It's been an astonishing display of solidarity during a very difficult time …

What an unbelievable experience - I never dreamed we'd hit £100,000! Thank you to everyone who has donated. It's been an astonishing display of solidarity during a very difficult time for refugees. I can rest my steely thighs, but the real work continues for the grassroots volunteer organisations across Europe that are trying to make this world a fairer place for everyone. You've helped them make a difference: thank you!

I'm riding and running 547 miles for Help Refugees because our borders are trapping millions of people in intolerable conditions.

As I write, there are over 37,000 people living in horrifying camps on the Aegean Islands. They're stuck there, not only until the end of the Covid-19 pandemic, but until such a time as we collectively choose compassion over nationalism.

It's easy to feel hopeless, but we can make a difference.

That's why I'm spending all my exercise time helping Thighs of Steel and Help Refugees run, roll and ride around the world in only 40 days!

The main beneficiary of the money you donate through this page will be Khora, a grassroots community centre in Athens that offers displaced people hot food, legal support and friendship. The centre is run entirely by volunteers on solidarity and donations.

I visited Khora last year and met a wonderful bunch of people who are already making a difference. The work they do is of immense practical and psychological support to actual human beings every day.

Khora hasn't shut down over the pandemic. Their kitchen has instead doubled its production and volunteers have been personally delivering food packages to vulnerable people across Athens, including to refugee camps abandoned by the authorities.

Alee is a long-term volunteer and refugee from Pakistan who found Khora after the factory where he worked was shut down in 2016.

'I didn't come here to volunteer,' Alee told me. 'When I came here, I was homeless, I was jobless, I was penniless – even hopeless, to some extent.

'I was at the verge of mental collapse,' he says. 'I mean, I could have been suicidal. I could jump from the fifth floor. The Khora volunteers kept me alive. Honestly, I'm telling you, they kept me alive.'

Fluent in multiple languages, including Greek, Alee started volunteering as a translator on the Khora info desk, during refugee hospital visits and with the legal team.

Now Alee spends most of his volunteer time at the Khora Free Shop, where refugees and others can pick up clothes, shoes, toiletries, books, toys and other things they might not be able to afford.

'Khora is about giving hope as well as help,' Alee says.

If you think that helping refugees is a generally good idea, then please donate whatever you can afford. Thank you in advance!

That was the distance of my first ever bike tour, 11 years ago. Without that very naive inaugural cycle - I taped my brakes together when they malfunctioned on Day One - I would never have gone on so many adventures or met so many amazing people. 547 is my way of saying thanks.

Nick B donated to THIGHSOLATION 547

Tim B donated to THIGHSOLATION 547

Illia A donated to THIGHSOLATION 547